What does it take to build people power?

When I was in high school, long before I knew anything about social movements, I wrote some letters to my local MP. Legal Studies was my favourite subject and we frequently discussed the horrors of capital punishment. I crafted some ‘persuasive’ words and put them in the post.

I tried to exercise people power by playing by the rules of our democracy, but no one even wrote back.

In 2001 I was horrified when the Tampa crisis and September 11 were twisted into a story that refugees were terrorists. I was in the Labor Party, and I helped set up a group called Labor for Refugees. We used every internal Labor Party process to make change, and despite initial success, by January 2004 we were crushed at the ALP National Conference.

I tried to work inside a political party to build people power – but on its own, it wasn’t enough.

Not long after in 2003 I marched with half a million other Sydney-siders against the war in Iraq. It was the largest protest in Australia’s history. It was big – but I quickly learnt that big isn’t always best. Australia soon joined the war in Iraq and the Walk against the War Coalition that organised the protest fell apart.

We mobilised people to create people power, but we struggled to sustain the pressure.

In 2007, tired of one-hit wonder protests I started the Sydney Alliance. A broad based coalition, it was all about deep relationships, cultivating leadership and strengthening organisations. We connected people from across the city who didn’t necessarily come to protests. Muslim leaders from Lakemba with construction workers from Homebush, school cleaners from Campbelltown and Uniting Church leaders from Gordon. It was amazing, but still lacked – something.  We struggled to take our local connections into workable solutions that could shape the city, the state or the nation.

We tried to organise to build people power. The network ricocheted across the city but it struggled to scale up from the local.

In 2018 I traveled to Cape Town as part of an international research project to better understand people power in cities. I worked with the social movement Reclaim the City that ran two major emergency housing properties. They had created these spaces through the illegal occupation of two disused provincial health precincts. Reclaim the City sought inner-city housing for Black poor communities and started to win that ‘impossible’ demand by doing it themselves (for more see this ChangeMakers podcast).

Reclaim the City’s occupations modeled or prefigured what they wanted in the world. Their prefigurative people power told a story of hope by declaring what a better world could be

Each of these examples offers a piece of the puzzle of people power. Have a look at this figure: 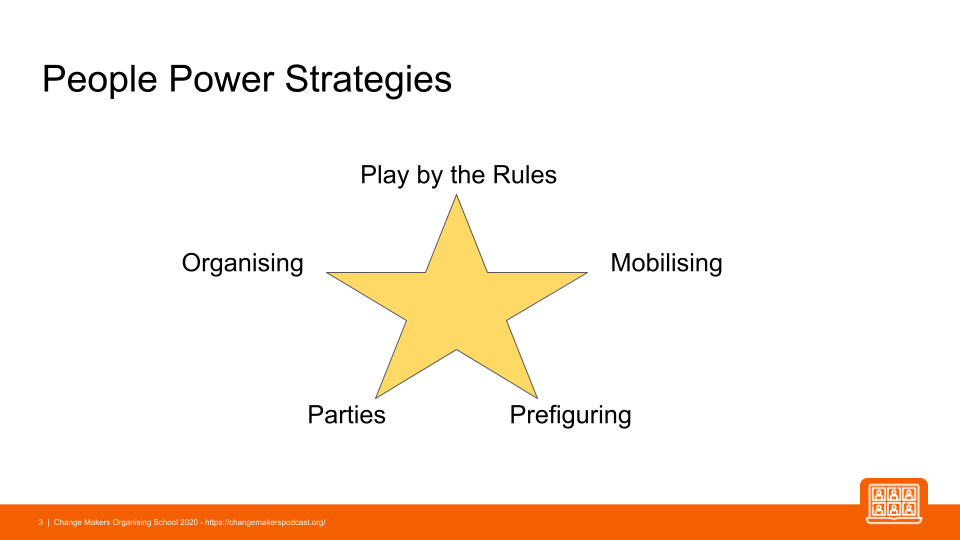 Playing by the rules uses the opportunities in the system to make change, for example mailing a letter to a politician, signing a petition or being part of a consultation.

Mobilising creates pressure by drawing together large numbers of people in action, like a protest.

Prefiguring builds power by modeling the world we need through our actions, showing that change is possible.

Intervening in parties creates power by changing the people who make decisions in the state.

We can see this most powerfully in Barcelona. Following the 2008 Financial Crisis, people in the city experimented with every form of people power. They organised with La PAH against housing evictions, mobilised as the Indignados, prefigured a vision for the city through occupations, played by the rules through policy reforms. And then, when all of these strategies were not enough, they formed a new urban party called Barcelona en Comu that won the elections – and housing activist Ada Colau became Mayor, twice (for a podcast on this, click here and listen to the second half of the episode).

But where do we build this power?

Most often we build it in small groups – in workplaces, in local community groups, in Parents and Citizens’ networks, in distributed networks inside social movements, in local coalitions, and in political party branches.

Small groups make big change when they work deftly and powerfully to harness people power in a variety of ways, and when they team up with other groups who are different to them – so they can align their strengths.

The ChangeMakers Organising School creates a space for organisational members and movement volunteers to learn about people power and community organising so they can strengthen the change they make. Built in the heat of the pandemic, it brings together people from across the country, and from a range of social movements and groups to build strength in our diversity.

Our next season is all about how small groups build big change by understanding people power and sharing the insights of organising.

If you are wanting to strengthen your group, if you are like me and going through some puzzling reflections about what it takes to make change – this nine week series on Thursday nights is for you.

We don’t pretend to have all the answers – but we do have a variety of amazing speakers, trainers and participants who can puzzle through the dilemmas with you.