On Thursday 29 August Jimmy Sham Choo – the head of Hong Kong’s Civil Human Rights Front was having lunch in a restaurant in Kowloon when he was attacked by two people holding a baseball bat and a knife. The next day a series of democracy activists were arrested – including Joshua Wong and Agnes Chow, and a protest permit was denied for the CHRF for a mass protest this Saturday. A crackdown has begun in in Hong kong.

Choo is the Australian equivalent of the head of GetUp or ACOSS. The Civil Human Rights Front was founded in 2003 as a coalition to stop sedition laws, that, like the 2019 Extradition Bill, had been drafted broadly and threatened Hong Kong’s rule of law. Since that time, the CHRG’s role has been to organise mass democracy protests. Their demonstrations are large, always family friendly and peaceful. They are widely respected in the role that they play.

Choo’s organisation isn’t directly connected to the more confrontational work of the younger generation of protesters. But unlike in the 2014 Umbrella Movement when older democrats and younger democrats clashed and argued about confrontational tactics (like challenging the police), in 2019 Choo and others have agreed to step back and ‘not direct others’. Instead they ask for respect for their role and provide space for others to do their own thing.

In doing so, they have created an unusually resilient social movement. The CHRF has broken the script of traditional large protests movements. There are no factional spats here.

The decision to not criticise each other has produced a co-dependent social force. Families, more mainstream democrats, lawyers, public servants are able to eagerly fill the street in their millions to support the protests and their Five Demands (which range from withdrawing the Extradition Bill, to an independent review of police conduct and the implementation of universal suffrage). Alongside, younger protesters, fearful of a future beyond 2047 where Hong Kong no longer has a separate ‘system,’ can protest in their own way.

Stepping back, it is clear that the intersection of these two forms of protest has made this movement globally and historically significant. Carrie Lam’s only real concession came after a day of confrontational protest on 12 June, not after one of the three (and counting) multi-million person marches. The controversial airport protests made Hong Kong global front page news. This more aggressive form of protest satisfied the press’s cynical desire for conflict and drama, even more than the 1.7 million demonstration that followed.

Lam, in coordination with Beijing, had up until now focused her attention on the younger protests. By weaponising tear gas, by creating space for vigilantes dressed in white to beat up protesters, by allowing the People’s Liberation Army to police alongside the Hong Kong police force, by setting up under-cover police as protest infiltrators – she aimed to provoke violence from protesters. If she could succeed in painting the young protesters as terrorists she could justify a decision to institute ‘a state of emergency’ (read martial law), as a way to clear the streets with impunity.

All the while the west have stood by as this ratcheting up of forces has occurred. While Prime Minister Scott Morrison has made a strong defence of democracy – we haven’t seen any urgent multilateral democratic intervention by the US, UK, Canada, New Zealand and Europe. 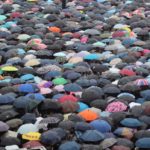 Tragically the Hong Kong protests have occurred at a time of heightened nationalism. The UK is too busy denying its own citizens democracy to care about the more violent threats to democracy in its former colony. Trump is more interested in playing hot and cold trade wars with Beijing than dealing with Hong Kong. Australia needs to do more than issue statements. Like Gareth Evans work on Cambodia decades ago, we need to draw together a multi-layer diplomatic dialogue to support and strengthen the democracies in our region – and promote de-escalation and compromise in Hong Kong.

It is getting worse day by day. Carrie Lam and Beijing have now changed strategy. They have widened the front of their attack to include the Civil Human Rights From and they are have brought tanks and military vehicles into Hong Kong. The CHRF have, for the first time, been denied a protest permit this Saturday. Late on Friday they canceled the demonstration. The number of beatings and attacks on democratic leaders have intensified. Wait for the cyber attacks on key websites like Telegram and LIHKG (a reddit style organising site) to follow.

In Tiananmen in 1989 there was a process before lethal force was used. Curfews, martial law than live ammunition. While the idea of a repeat of Tiananmen in a city as large as Hong Kong (and against a protest movement that moves fluidly – like water) seems ridiculous, it would appear that we will like have a state of emergency declared soon.

But while this is an asymmetrical war, both sides have power. The democracy movement’s unions have called a general strike for Monday 2 and Tuesday 3 September. International solidarity movements are escalating their support. There are calls from unions across the world for sanctions, and in Australia to stop the free trade negotiations with Hong Kong until a compromise is struck. US Congressional committee meetings about Hong Kong commence in Washington DC in September.

The most practical way forward is for Carrie Lam to resign, and for a new negotiator to begin serious discussions with the movement that put universal suffrage on the table. Universal suffrage isn’t a PRC sovereignty issue, it’s written in to the Hong Kong Basic Law as an ‘ultimate aim.’ Right now, it looks like the one thing that could avert serious violence.

If the worst possible thing happens and the government shoots its own citizens, there will be genuine disaster. The students in Hong Kong see the fight for democracy as existential, and many won’t retreat from the streets even if live ammunition is fired. Lee Chuck Yuen from the Hong Kong Unions was in Tiananmen on June 4 1989, and he remembers students saying they were heading off from the square to stop the tanks. They died. In Hong Kong people have died already, at least six by suicide. There is a genuine risk of people becoming martyrs in a fight against PRC military power.

And then what happens, a recalcitrant west finally acts and places sanctions on Hong Kong and the PRC. Global financial instability. People flee as refugees. And Hong Kong as we know it is over.

It’s the highest stakes battle in the world right now. Let’s hope it ends without violence. But that will require action by the supporters of democracy, not just words.