In the heat of #FeesMustFall some reflections 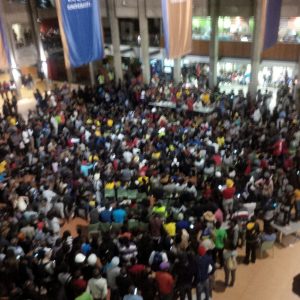 The #FeesMustFall movement was very diverse and rich with dialogue and conflict.

This is a letter written by a student leader in the heat of the movement from Wits University. He gives a live account of some of the tensions that divided the movement. It talks of the centrality of intersectionality as a core value of #FeesMustFall. He identifies potential ‘saboteurs’ who came into the space seeking to lead the movement in directions that created tension and conflict. And he identifies tensions with the SRC, and the between some more radical students and the student wing of the ANC.

As a text it gives you an insight as to what the students were fighting for, but also the struggle it took to pursue their demands around a transformed education system.

A letter from the chair of #FeesMustFall occupation at Wits

On Wednesday the 6th of April 2016, a meeting was called for all staff, students and workers who felt marginalized by the protest which took place on Monday the 4th of April 2016. The aim of the meeting was to give voice to those who were marginalized at the protest, particularly those who identify as feminist and/or queer. Many questions were raised during the meeting pertaining to who had organised the protest, and what gave the organisers the right to exclude anybody who is interested and affected by the fight free quality decolonised and insourcing. It became apparent in this meeting that the protest was led predominantly by students who were not members of the Wits community, but who had come from various campuses across the country to protest with the intention of shutting down the university.

The meeting was publicised and open to anyone who felt marginalised; many workers who were called to protest articulated a concern for being used by the leaders of that protest in order to push a political agenda. A call for an open letter was made in the meeting to address several questions which arose from Monday’s protest namely:

As marginalized bodies all those party to this meeting condemn the mischievous nature of a rogue protest in the name of #FeesMustFall. Our bodies are not to be used as pawns for political agendas. 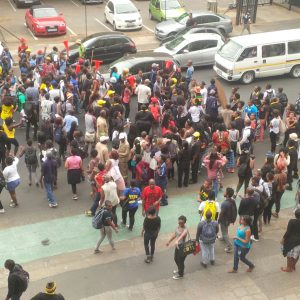 This letter is an assertion of the #FeesMustFall space as one which will not be used to build political resumes or to bolster anyone’s public persona. Our interests as #FeesMustFall are clear. Our fight is one for free quality decolonised education and insourcing for all vulnerable members of the university in our lifetime  , and for the emancipation of black subjects who strive for a life of dignity. Our identities have been and continue to be intersectional, and for the purpose of realising a society which provides equal opportunities for all in terms of education.

It is a demand for a response from those who act in our name, and for clarity on the events which unfolded on Monday. We refuse to allow misogyny and patriarchy to oppress bodies which live in oppression, this fight is one for the people of Azania. The same people who have been on the forefront during protest only to continuously be hijacked by political opportunists.

Our response to this show of oppression is #NotMyFMF, we will no longer allow our bodies to be used, no longer will we tolerate oppression, no longer will gender based violence be used to keep us silent. Ours line of march is clear, and we will fight!

On the 6th of  April the university renamed the central administration building Solomon Mahlangu House. We have fought in the spirit of Mahlangu and reaffirm our that our fight is for the love of the people who must, as they have no other choice, continue the struggle for emancipation.

We call on the University of the Witwatersrand to respond to the financial exclusion of students despite numerous statements assuring that no deserving students would bear the brunt of financial exclusion. We know that the time has come for decisions to be made around fees, and say in the same voice as last year #FeesMustFall. We cannot sit idle while workers’ demands for insourcing have not been met. It is not good enough that the university has established a task team, we need tangible results. Workers in the canteen continue to be treated as subalterns, working without  payslips and lunch breaks. Much like the other workers in the university, these are our parents, and for too long have their voices gone unheard. Other companies have been removed and the livelihood of the workers of those companies removed with them. We say #EndOutsourcing, for too long have black families suffered in the myth of the rainbow nation, for two long have black lives been built for prisons, for too long have the elite sat silent while the disparities between rich and poor  #NotInOurNames!

This open letter is a call to action. We realise that while the state is responsible for a reshuffling of funds to meet the demands of students and workers, that the university too is responsible for fixing internal affairs. We call on the university to engage with #FeesMustFall to address the funding crisis, to put our heads together in imagining a completely insourced workforce. We call for a meeting of the insourcing task team to answer questions about their processes. We cannot sit idle. We call on the SRC to stop violating the trust of the students, workers and staff, to stop appearing in our name in the media. The SRC have long been on a parallel campaign, which defeats the purpose of a body which is supposed to be for the students, by the students, come out of your ivory tower, and lead in service, the thousands of workers and students at this university need not your faces, but your hearts and minds. For too long have your actions gone unaccounted for, for too long has your leadership been amiss. We are tired of petty politics, you are students before you are the SRC, come and lead by following. We are not here for names sakes or to appear as the face of this movement. Ours are not concerns with the limelight, we feel betrayed by the Student Representative Council – led by the Progressive Youth Alliance (PYA) – the student arm of the African National Congress (ANC) the same party who deploy police armed with weapons to quell dissenting voices in protest – the same ones who violate our bodies, and degrade our mothers through the use of brute force on us during protests, but we cannot win this fight alone. We cannot action such responses in isolation. We call on staff and students, academics and families who have a vested in the protection of all including minority groups, to come together, to engage, to seek solutions to the many problems recently unearthed.

We need accountability, transparency, respect and to reclaim our dignity.

Let the blood of Solomon Mahlangu nourish the fruits of freedom, we will fight until we are free.