On Sunday 18 August 2019, the same day that 1.7 million Hong Kongers marched for democracy solidarity marches occurred around the world. One was in Sydney, and ChangeMakers host Amanda Tattersall spoke: 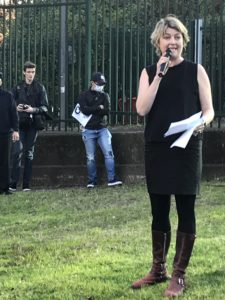 My name is Amanda Tattersall. I work at the University of Sydney as an academic.

I research social movements. Four weeks ago I was in Hong Kong – visiting the protest movement interviewing leaders and going on democracy protests.

For 20 years I have studied and been part of social movements all across the world, in every continent. And I have never seen what we are seeing in Hong Kong.

This is different. It is partly because Hong Kong is so different. It is a city with some democracy, some freedom – but not full universal suffrage. And it lives with the constant threat that in 2047 those freedoms will be taken away when One Country Two Systems ends.

In Hong Kong, without a democracy, the movement has had to innovate and change – become different to the social movements of the West.

This year – to stop a frightening Extradition Law – on 9 June, there was a 1.2 million person rally. It didn’t move the government.

So the students invented a new form of protest. Militant defence. They call it Be Water. Preparing yourself for the excessive use of force, for tear gas – but being resilient enough to keep your feet on the streets.

They have had their feet on the streets for 11 weeks now. And it has woken Beijing. Initially Beijing thought they could turn the Hong Kong public against these students by publicising a few aggressive clashes. They were wrong. Hong Kong people stand with the protesters. They want Carrie Lam to stand down. They want an inquiry into police brutality. They want more democracy.

Now Beijing are parading their tanks. Their military have joined with Hong Kong Police. Beijing accuses the umbrella wielding students of violence while they amass the military at the border.

Do they think we are fools?

We know what violence looks like. We remember Tiananmen. Unlike in China, our kids are taught about it in school.

In any negotiation – when you have the guns it is your responsibility to act with caution. It is your job to use words, initiate dialogue, to seek concessions, to create de-escalate.

Beijing – we are gathering all across the world. We stand with Hong Kong. And we are watching you. History is watching you.

I teach students from around the world about citizenship, democracy and social change. To me these ideas are not just words. They are creeds that I live by.

I am honoured to be here today to support the protesters in Hong Kong, and all the university students from Hong Kong.

As a teacher of democracy – I know that universities are the only place that we learn about words like democracy. Social movements like this are the greatest teacher. Today we strengthen our democracy by defending the democratic rights of others.

Your decision to come here today is an important action, but it must be the first not the last.You need to become ambassadors to your friends, your groups, you community. There is a HASHTAG StandWithHK – spread it around.

Democracy is not just showing up to a protest. Citizenship is about shaping political life.

Hong Kong needs you now. Our world needs you now. We have so many devastating challenges – our climate, about how we treat refugees, about inequality, about white supremacy – and today Hong Kong.

Too often we take our democracy for granted. Hong Kong shows us that democracy is worth fighting for.

Today we stand with Hong Kong – because we stand for a better world.