What do the Australian climate strikers and Hong Kong protesters have in common? 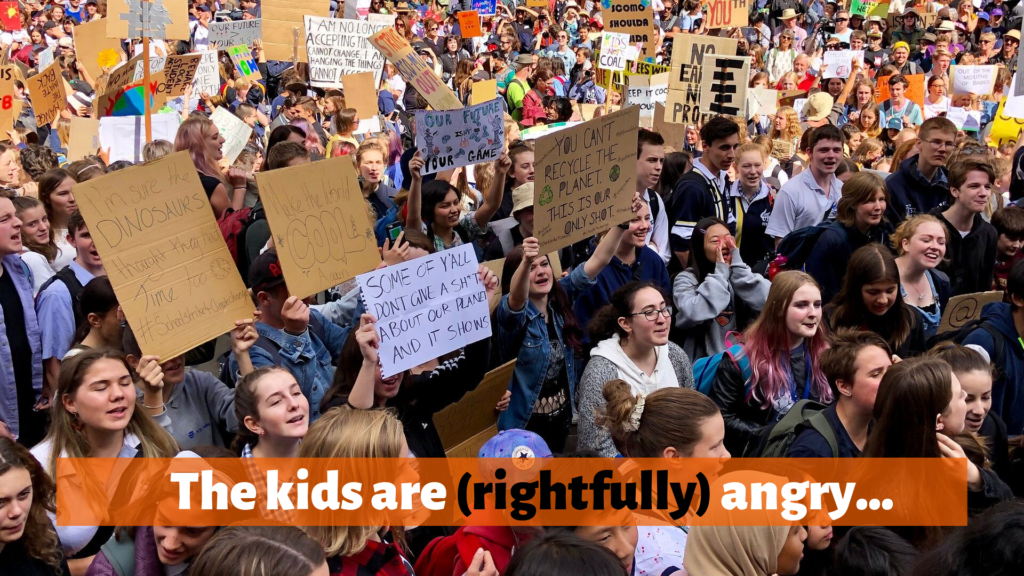 The kids are angry. The climate strike on 20th September and Hong Kong’s daily democracy protests suggest that protest has become the new normal for the next generation.

The battles of the young Hong Kong ‘braves’ and the climate strikers aren’t the same. While their encounters are both existential, Australians enjoy the privilege of universal suffrage that the Hong Kongers’ are fighting for. Even so, there is deep resonance between their struggles.

Each conflict is staged in front of a ticking time bomb. Hong Kongers fear the 2047 Handback to the People’s Republic of China. The climate strikers fear the IPPC advice that we have 11 years (at most) to stop extreme climate change.

Each struggle, has remarkably, turned fear to hope.

In Hong Kong, hope first came through radically, powerful action. In May 2019, young people swarmed on to digital platforms, most notably LIHKG and Telegram, where they came up with and voted on protest actions. Having learnt from the tear gas of the 2014 Umbrella Movement, they planned to wear a new uniform on the streets. Helmet clad, goggle wearing, face-masked, bearing black clothed young people poured onto the streets in June. They were anonymous – this movement didn’t have a visible leader – it was a swarm. On the 12 June, the confrontational strategy of the braves kept the Legislative Council from functioning. Hope was about having a strategy to resist over-policing and tear gas. Hope wasn’t wishful thinking, it was about people power.

The Australian student strikers also locate hope in their people power ‘strike’ action. Walking out of school on the 30 November and 15 March has generated friction with many of the politicians doing the least to stop climate change. It has also struck a chord in high schools – building a movement that is intensely diverse (in ways that the adult climate movement has struggled to achieve). They too have creative digital strategies like Facebook messenger and zoom chats, whose open spaces have allowed anyone to step up and lead. The students strikers don’t have ‘one’ leader – rather people become recognised based on the work that they do.

Demanding more, not just ‘no’

Hope in Hong Kong was also about the scope of the fight. Initially the battle was about a Bill, but in June when Carrie Lam refused to withdraw Extradition, people widened the demands. Some of the Five Demands were about the immediate protests (police behaviour, being labeled rioters, an amnesty for protesters) but the most important was for universal suffrage. Most fights in Hong Kong are about democracy. While the framing in the Five Demands was modest (the demand was consistent with ‘one country, two systems’), calling for universal suffrage turned 2019 into a symbolic David and Goliath fight about the power of the People’s Republic of China over Hong Kong.

The Climate Strikers also have a mix of ‘no’ demands and positive solutions. They call for no new fossil fuel projects like the Adani mine, but they also suggest 100% renewable energy generation and a just transition program for fossil-fuel workers and communities.

By pivoting the energy of ‘no’ into specific solutions, both of the student groups harness their moral righteousness to present an expansive, yet specific vision for how things can be made anew.

Hong Kong’s braves actively work in partnership with the adult ‘peaceful movement. A co-dependent connection with groups like the Civil Human Rights Network, who organise the multi-million person protests, is essential for their power and success by demonstrating broad-based support.

In Australia, a variety of adult networks support the students. Help comes in the form of organisers from NGOs, with publicity or fundraising or training skills. In addition, the student strikers have actively cultivated relationships with other movements – most particularly the union movement.

Urgency is core to any movement, but it generates a janus-faced energy in social change. While it may send people to the barricades, without a moderating quality it can be overwhelming. Hong Kong has struggled with this. There is burnout and stress in the movement has tragically led to the suicide of several people. Urgency, if not moderated by perspective, can lead to panic and mob behaviour. We have seen glimpses of this panic in Hong Kong, while also noting the extraordinary discipline and peacefulness of this movement.

The Australian student strikers have some advantages campaigning in a democracy, where networks can be public and peer to peer support can be easier to create. But there is anxiety amongst our young high school student strikers as well. While striking for climate change helps many to feel constructive about their fears, there are also mental health concerns arising from the constant barrage of devastating climate data.

Here the strikers can learn from Hong Kong, who established support networks for young people. These support networks were run by the adult communities and they include anything from spaces to hide, to recuperate or to recover. They do this because they see how brave young people are being, many feel guilty for not having created a better world for them. When it comes to climate, adults can play a role in providing support for young people where needed. We adults have let children down, and we can find out what kinds of support they need.

The next generation have already demonstrated that they will be a force seeking nothing less than global transformation. Holding to an understanding of powerful tactics, ambitious demands, coalition building and creating support for working in difficult times, these students, joined in partnership with passionate adults, might just change the world.

If anything in this story has raised issues for you please contact Lifeline 13 11 14 www.lifeline.org.au or the  Suicide Call Back Service 1300 659 467 www.suicidecallbackservice.org.au